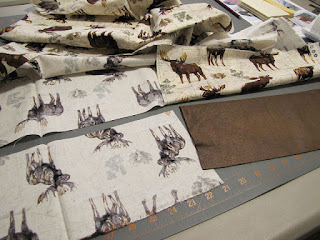 Honestly, I've been at this "art" and "craft" thing long enough to look askance at any project labeled "quick and easy". But I liked the look of this "Quick & Easy Leather Journal" and that it could be adapted for the 3 leftover signatures waiting to be used. I'd settled on who to give it to, my hair stylist who is also an avid hunter, thus the digging out of some fabric with moose on it. Not wanting to deal with seams again, I found a seamless spot on the leather bomber jacket from the thrift store big enough to cut the cover from. 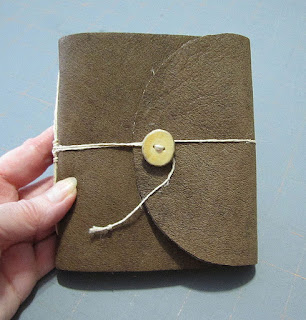 And even though the video showed that it could be made in under an hour, and one of the members on the Handmade Bookclub Facebook page reported she had made one in 30 minutes, it was more like 3 hours over 3 days for me, once I dithered over fabric choices, waxed up the handspun hemp thread, cut and fused the lining to the cover and fiddled with learning how to make an enlarged copy of a curved flap template.

Once I got to the stitching, it went fairly fast, although attaching 3 signatures through one set of holes takes a bit more maneuvering than if they each were stitched through their own set of holes. A simple pamphlet stitch that ends with the thread coming to the outside through the center hole, there is plenty of thread left to do a little "packing" of the multiple threads on either side before knotting off and using the excess thread as a closure, wrapping it around the book and then a few times around the elk horn button on the flap. 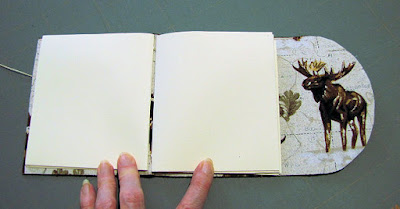 I'd originally thought to put a snap on that flap per another small leather journal in a book I have on hand, but since I so perfectly lined up the lining fabric for a moose to fall in that area, I didn't want to cover the moose up with a snap. The small bit of stitching to attach the button hardly shows at all. And unlike the last leather journal I made, there are no big gaps between signatures.

I really like this little journal and am sure I'll make it again, probably a little quicker next time. If you'd like to try making this journal yourself, the video instructions are here.

Also this week, I started cutting the over 100 strands of yarn for fringe on the mobius scarf I finished up last January. At least, I reported that it was my first finish of the year, although it still needed blocking and maybe the addition of fringe per the pattern. I got a real shocker when I finally took it up to the studio for blocking but first tried it on, only to realize the binding-off stitch I used must not have been right, no stretch in it at all which meant the scarf did not drape like it should. Over the next few months, I tried it on again several times to convince myself it was ok as is before finally checking the pattern directions to see that indeed, I'd not used her binding-off directions. There it sat on my coffee table with the pattern month after month until finally in December I knew I had to bite the bullet, take out the binding-off stitches and redo them properly. I did get that done by the end of the year, got it blocked and am now slowly adding the fringe when I watch one of my afternoon news programs. Yes, I find this embarrasing that my first finish of 2021 has now become one of my first finishes of 2022!

Posted by The Idaho Beauty at 8:20 PM

I've done those 'oh, so quick & easy' projects & apparently what's fast & simple for someone else doesn't always apply to me! Your end product is really beautiful & the horn button is the perfect size! Don't be embarrassed about re-finishing the scarf--congratulate yourself for tackling the project instead of stuffing it in the trash! Stay warm! Jan in WY

The simplicity of the journal is so appealing. How to you adhere the fabric lining? Glue? What kind? Keep up the great work!

Your hairstylist will certainly appreciate that gorgeous leather book. I love how you lined up the moose on the inside flap! Onward into 2022!!!

Jan, no way that scarf would be trashed as it is made from gorgeous alpaca and something else blend yarn from New Zealand - a gift from my cousin. At worst I just would have worn it with the binding making it curl under in a way not nearly as wonderful as the drape with the right binding. Don't you know by now how stubborn I am about these things, even if it takes me awhile to make things right? lol

Sherrie, my stylist got one of my padfolios years ago and kept telling me how much she liked it and how she was using it. It too had an elkhorn closure. Can't wait to find out how she might utilize this little book.

Mary, I did realize I'd forgotten to mention how I adhered the fabric to the leather and had a feeling some inquiring person would ask, so thank you for being that person. Easiest way, I've discovered through my Handmade Book Club, is to just use fusible to do that. The leather is less delicate than I imagined when it comes to the fusing process. Can even use steam a bit if necessary. I've used Heat and Bond (because it will fuse at a low temp) but the last two I've just used my usual Steam A Seam, which I notice now says you don't need to use steam, although steam I think would make for a better bond. I also cut the lining slightly smaller than the cover this time because I've had issues with fabric fraying as I sewed in signatures. Switching to Steam a Seam and not having the fabric right out to the edge of the leather really helped alleviate that problem. Apparently you can use glue on leather for a more archival solution but for these, the fusible web works just fine.

that moose is absolutely perfectly placed.
I did two journals for two grandson with cowboys inside the covers and train engines as the signature wrappers---I have a large collection of novelty fabric---it is so fun and glad to see someone else with my taste.

Sylvia, I think I've always had a soft spot for novelty fabrics in my sewing, but when I moved to Wisconsin and got serious about quilting, I was so amused at how much bovine and farm print fabric was available - I bought a lot and made two wall quilts from them, so much fun. Of course, by the time I left Wisconsin 13 years later, I had tired of all the cow and moo fabrics and had pretty much used them all up, glad for my stash to be rid of them. So imagine my dismay when a Wisconsin friend made me cow fabric potholders after I moved back to Idaho! Still in my stash though are novelty fabrics bought back there depicting woodland scenes and creatures, motorcycles, fairies and more. It really is fun to find places to use them, as linings or backings or surprises in the piecing, especially when creating for little ones.