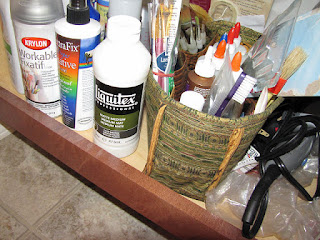 A few weeks ago I got the word from the management company I rent from that there's a city ordinance requiring the flappers in toilets in rental properties to be replaced after a certain amount of time and our buildings had reached that magic number. So I was required to set up a time for the maintenance man to come by and do it to my three toilets, a quick repair, but one that made me realize I had some extra cleaning and picking up to do before he arrived. If you live alone, you understand how easy it is to let some housework slide and boy had I let it slide lately, what with the issues with my back. Plus two of the bathrooms are on the second floor with the stairs and landing having served as a dumping ground for things that needed to go upstairs or into the studio but not right away. Yeah, I even procrastinate on that and now I needed to make that stuff disappear to where it was intended. What's more, one of the upstairs bathrooms I don't really use as a bathroom since it is off the master bedroom which I use as a studio. I've delegated it for my paints and stamping supplies and boy, did I have stuff stacked all over the floor and on the toilet seat and tank where he needed to get in to work. While I've had years to hone my storage system for my quilting things, I've failed to get a handle on organizing these newer mixed media supplies. Thus, picking up and putting things out of sight in there was not unlike the archeological digs I encounter whenever I clear my work table. Oh...THAT'S where that went to. Hmm - forgot I saved those things. Oh yeah, here's something I set aside to be stenciled. And when I opened the cupboard under the sink to put away the organizer that holds among other things my paint brushes, I was dumbfounded to see a very large bottle of matte medium! I have no recollection of buying it, obviously, since I recently related to you how I gave in and bought some to try with my collage since everyone raves about it. Yeah, a little embarrassing! 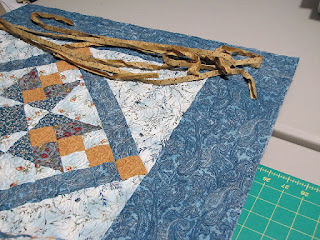 Also a little embarrassing is the way I continue to drag my feet over finishing the fat quarter quilt. To be honest, I'm letting that piping intimidate me unnecessarily - not like the first time I've ever done it. But at least like the binding, it is pieced and pressed in half, ready to go. But the real foot dragging has been because of the terrible cigarette smoke smell that arose from the quilt after I dampened it in preparation for trimming. It had to go out into the garage to air for quite a bit before I could bring it back in and square it up. I'm still a little stumped about the smell, although I know it was picked up in that quilt shop where I taught the class so many years ago. The shop was next door to a bar, and even though the owner had air filters going, anything that stayed in that shop long soon picked up the smell. I know I washed all the fabrics before construction and no doubt used a little steam from the iron now and then when pressing that should have alerted me to any lingering smell. All I can figure is that it must have absorbed some of the odor while hanging in the shop, but not such that one would smell it until dampened. What a shock. Once I get the binding on, you can bet I'll be doing a deep soaking with vinegar and thorough washing before this goes on my bed. 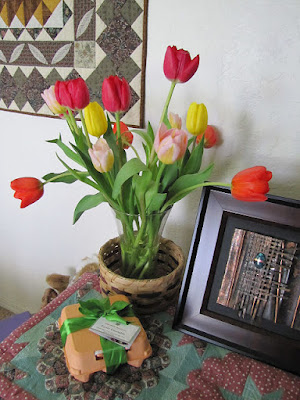 To those of you who celebrate, a blessed Easter. I also understand it's Ramadan and Passover, three major religions celebrating their individual major events at the same time (it doesn't happen that often). To everyone else, happy spring! Still doesn't look like spring in my neck of the woods (just south of us about an hour away they got up to a foot of snow the other day, and even more as you continue further south down the Idaho panhandle). But the arrival of these tulips from my niece, Vanessa, brought instant brightness to my days. 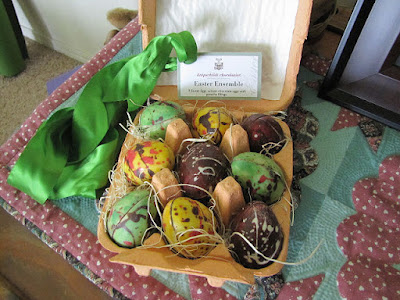 She sent chocolate too - how cute are these handcrafted hand-painted "eggs"? Worthy of the calories! 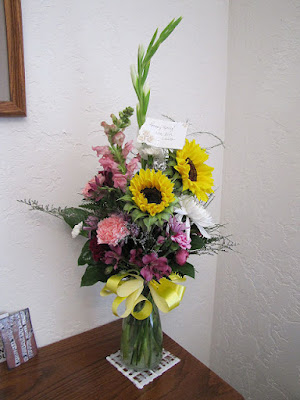 The tulips arrived just as this spring bouquet from my cousin Laura was starting to fade. I've been enjoying them for several weeks and they were the perfect tonic to my not quite winter not quite spring blues.

Wishing you beauty and brightness and the promise of hope and new life wherever you may be.

Email ThisBlogThis!Share to TwitterShare to FacebookShare to Pinterest
Labels: Misc

Don't have anything to show for the week save getting my taxes finalized and making my way through a few more of a backlog of magazines. A January/February 1921 issue of Artists Magazine introduced me to Heidi Jung, and I doubt I have to tell you why I am drawn to her work.

"When we meet a work of art, there’s something about that encounter that isn’t fixed in time, but rather, it unfixes time: the shaft opens. The past and present exist in the same moment, and we know, as beings, that we are connected. All the people who lived before us, all who will come after us, are connected in this moment." Ali Smith

I guess that is a little what happened to me as I paged through her work featured in the article "Giving Nature Her Due", unfortunately not available on line. And her interpretation of different plants, often without color, took my breath away. Doesn't happen all that often. But then I needed to know how she did it and found she is using sumi ink and charcoal on Mylar in a process that hearkens back to her earlier work developing film in a darkroom. If you check out her website, I suggest you look at "installations" under the Portfolio menu where you can see her art hanging in situ as well as in exhibitions. Then take a look at Gallery 1 for more of these sumi ink on Mylar works. She also does acrylic on panel which can be seen in the other Galleries - all ethereal and beautiful to my eyes.

Email ThisBlogThis!Share to TwitterShare to FacebookShare to Pinterest
Labels: Other Artists 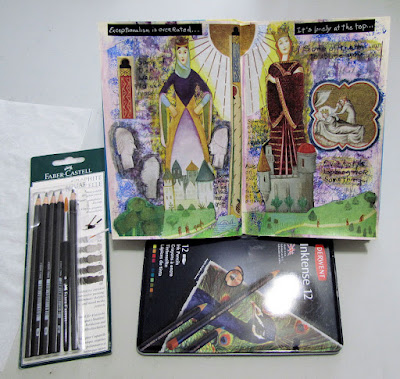 I think I'm done fiddling with this art journal spread. Here it is with the two things I used to help "blend" the collage elements and text: Inktense colored pencils and water soluble graphite pencil, two things I don't play with often enough. I'd been thinking a lot lately about the idea of "exceptionalism", and that while most would envy someone thought to be exceptional in some way, the person who is seen as exceptional often experiences an isolation not to be envied and difficult to break out of. Speaking from experience here although what I've noted people have thought exceptional about me is really not that exceptional. 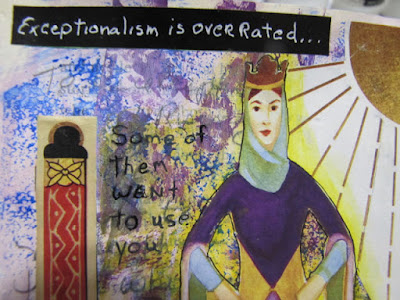 And then I ran across an article in Smithsonian Magazine about Brunhilde of Wagner's Valkyrie fame and her sister-in-law Fredegund who were not just Norse legend but actual queens ("The Medieval Queens Whose Daring, Murderous Reigns Were Quickly Forgotten" January 2022 issue). As I read through their history and drank in that fabulous opening illustration, I had my beginnings of a spread on exceptionalism using two very strong women as examples. "A queen had to dodge assassins, and employ some of her own, while combating the open misogyny of her advisers and nobles—the early medieval equivalent of doing it all backwards and in heels." And ruling through a male relative. The yellow you see around Brunhild is Inktense pencil. 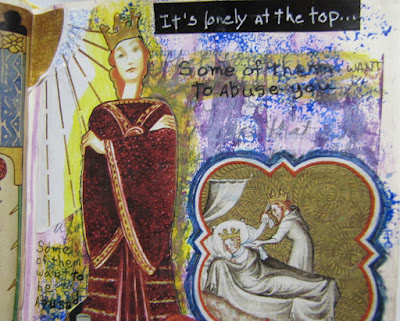 With Randy Newman's "It's Lonely At The Top" lyrics playing in my head, I built upon this idea of the exceptional being placed on a pedestal, either being adored or hated. Fredegund was in such a precarious position at the top; her predecessor was strangled after catching Fredegund,a slave girl, in bed with the King and going off in a huff. Ahh, palace life. By now strains of another song about popularity were coming to mind. These I inked in various open places on the spread. 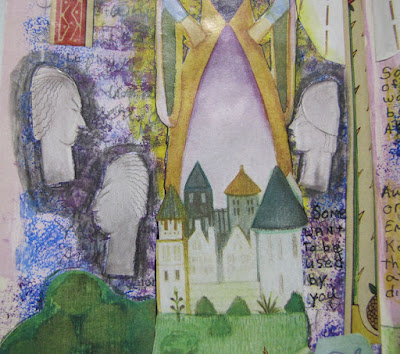 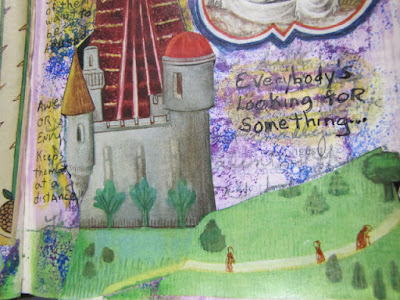 A final touch - adding some small characters along the paths - the "little people" who take little notice of those above as they simply try to eke out an existence and hope the rulers don't do anything rash to upset it.

Either way, always a separation that is difficult to close. As for our queens after they died, "With their accomplishments cut from official histories, the queens took root in legends and myths," a different kind of exceptionalism but no less lonely I suspect. Do read the article; it is full of interesting twists and turns.