The In Between Time 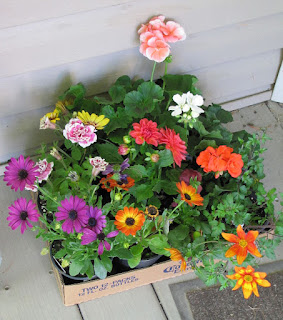 This week found me not quite knowing what to do with myself. I'd recently seen something about this phenomenon fairly common among artists. You make the big push to finish a project, setting all else aside, and then once done, you sigh with satisfaction but realize you hadn't thought about what the next project would be. You wander about, trying to remember what else you had in mind, whether it be a new piece of art or a bit of neglected housework. The driving goal that had kept you moving is gone and you've yet to decide on the next one, leaving you a bit uneasy in this in between time. Doesn't matter if your to do list is long or short, it can take a few days to find your bearings and get back to work. That's where I found myself and this is how I got myself going again, getting these plants that had been huddling in the corner of the covered deck until our nights quit dipping below freezing into their planters. Pictures of the final arrangement to come. 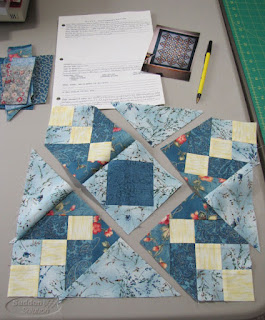 Then it was a ponder as to what my next "finish more" project would be. That set me on spin cycle so I decided to finish filling out the documentation sheet for the fat quarter quilt. That led to getting out those pieced sections that I figured were my step by step samples for making the blocks when I taught the class. Sure enough, when I laid them out, they will make a complete block when sewn together. And then what will I do with it? At least it will be out of the book.

I sensed what I needed to do next before diving into another quilt project was something I'd been putting off: mending the quilting on a quilt I use all the time while I am sitting or napping on my couch. I completed this mystery quilt in 2000 and when I showed it to the group of ladies I sewed with at the time, they oohed and aahed and said "You're NOT going to USE it, ARE you?"Well, yes, actually. The colors matched my couch, it didn't have expensive fabric in it, and I really liked the pattern that unfolded as I worked through the mystery quilt directions.

So 22 years and several washes later after nearly daily use, it's not surprising that the quilt is showing some wear. I'd noticed lately that when I slid my had down to grab a piece of it to pull up over my lap or shoulders, a finger or two would slide right under a loop of stitching that had come loose. As time went on, I realized this wasn't just one bit of stitching, but quite a few places that had come loose. I'd used invisible thread on the top and cotton thread in the bobbin and I suppose that invisible thread was the culprit, wearing through the cotton thread.

I realized the sleeve on the back was coming loose as well, to the point that I finally took all the stitching out, never planning to hang it for display again. (Can you believe this got an Honorable Mention at the Ashville Quilt Competition?) Oh, I was NOT looking forward to fixing this, having worked on a different quilt whose stitches had broken for entirely different reasons. But time to bite the bullet while I still had the ironing board next to the sewing machine to rest it on as I sewed.

I thought I'd found all the loops of invisible thread where I needed to sew new stitches and was a bit surprised to find that all of the stitches that had failed were the stitch in the ditch ones. All of the free motion stitching seems fine. Back over my legs that night, I purposely ran my hand over the entire quilt and found many more places needing mending. I tied yarn around the loops so I could easily find them when this went back under the needle. The failed stitching could be as short as an inch or as long as four. But I think I finally found them all and snipped off those loops on top. As always, click on any photo for a larger view.

I kept thinking, this is really something. I can't think of another quilt I own and have used that I've had to repair because of wear. Granted, this is some of the first cotton fabric I purchased for quilting before quilt shops with quality fabric became a thing and picked for this project because of that, in case I ended up not liking the pattern when the mystery was revealed. I even found one spot where there's almost a hole worn through one spot. I still have pieces of all of these fabrics so I could even patch it if it came to that. And I can't imagine replacing it with something new. This is my ultimate comfort quilt that I don't have to worry about being careful with.

Also really something, my studio appears to have swallowed another tool. The curve-tipped scissors I keep by my machine for snipping threads close to the fabric were nowhere to be found when I sat down to repair this. Again, I've tried to retrace my steps, pretty sure the last time I used them was when I was burying those last thread tails on the fat quarter quilt, and have looked in all logical and illogical places to no avail. Again, I worry they fell into the wastebasket and went out with the trash. But if I stop looking, I suppose they will magically appear, just like that favorite screwdriver.

Posted by The Idaho Beauty at 4:26 PM

Anyone I give one of my quilts gets a note saying 'Quilts are tough & meant to be used! Please don't put it on a shelf in a closet. Use & enjoy it often!' Good advice to give ourselves, as well. The repairs you're making are a sign that you DID use & love that quilt! What good are they hidden away on a shelf? Jan in WY

About losing focus after finishing a project: I read somewhere that the two times when artists are most likely to give up their art and get a day job (or whatever) are 1. immediately after getting MFA and 2. immediately after a big solo show.

About repairing quilts: I made a quilt for my sister's first child, in 1975. I didn't know much about quilting at the time, used a thin woven gingham check as a base to cross-stitch her name, used flannel as batting, other inappropriate choices of fabric and technique. Thirty years later it had totally disintegrated and would I please repair it. I ended up having to basically make a new quilt, incorporating bits and pieces of the original. Of course the new quilt was far more sturdy and well-made, since I had learned a lot in the interim.

Jan, I tell the people I gift quilts to the same thing, but I can't think of an instance of seeing evidence of said gift used up like Kathy described. My first gifted baby quilts were also made from a variety of fabrics gleaned from my dressmaking endeavors and minimal quilting skills so it wouldn't surprise me if some of them are mere rags today. Loved to death - a good fate for a quilt. Thanks for that story, Kathy.

Also, your mention of the two times when an artist might give up rings a bell. I think that might have been in the article I mentioned and I can see how that might be true. Especially with the solo show, I can imagine that "what now?" question after you feel you've already pushed yourself to your pinnacle. One thing that always kept me from riding on a high too long as opposed to setting a new goal and getting back to work was my late husband letting me crow about some award for a quilt or other recognized accomplishment, then saying, "yeah, but what have you done lately?" Yeah, he always knew which buttons to push to get me back to work!

Such a great post……one I’m sure most of us are familar with!