Inspiration Can Be Anywhere 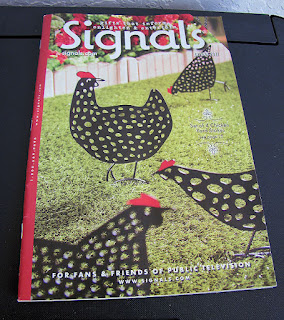 I've had this catalog sitting on my desk in front of the computer for several weeks now. I am not a chicken person when it comes to designs on anything, much less my quilting. And yet, something about these chickens fascinate me. Maybe it's the simplicity of the shapes, ones that should be easy for me to draw. And all those different sizes and shapes of the spots on them. Full disclosure, it took me quite awhile to realize that they were actually holes the the metal chickens and the green of the spots was just the grassy background showing through. None the less, it got me thinking of the many ways I could play with these chickens. Here are a few of the ideas I came up with:

But I did not try any of these because I had a bum week, spending most of it not feeling very good after I had my flu shot. This has never happened before but it would account for the two awful days when I really didn't feel like doing a thing but lying on the couch and the other days when I was not up to speed. Have decided that the reaction could be because my body is already on overload mending from the surgery. It has passed now, and although I did very little of anything last week, I DID spend a lot of time reading a lengthy science fiction novel with an impending due date a week away. If I had felt better, I might have felt guilty about the hours making my way through the end of the book. 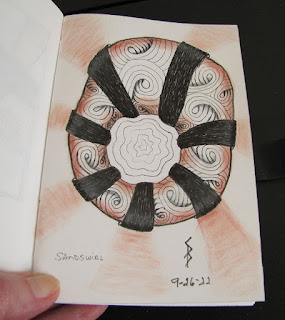 So having done nothing creative all last week (Another full disclosure: all three of my motorcycle racing series were racing Saturday and Sunday so watching 12 races and 3 superpoles pretty much took up the weekend). I took a look at the next Zentangle in the recent series today, and decided it would work up pretty fast. I am not a fan of this overall shape (which they admitted looked like a wonky donut), but it did introduce me to the sand swirl tangle which I can see is a useful filler and similar to some freemotion quilting swirl designs. No metallic pens this time but I did use ArtGraf again in lieu of their pastel pencils and got a surprise. I expected this to be bright red, and if I activated it with water, it probably would be. Instead, it's more the color I was going for on the last zentangle to compliment the coral metallic pen when shading. I'm not crazy about the "rays" of color extending beyond the zentangle and especially didn't like the fact that the center was left blank - very unzentangle. So I filled it in with what they call auras, or what we call echoing.

Posted by The Idaho Beauty at 7:30 PM

Your theory about the flu shot putting you on overload makes sense to me! I hope your back recovery is on track.

Thanks Sherrie, it appears so. And I hope your own post surgery recovery is equally on track. :-)

I'm sorry to read that your flu shot left you with some blah days. That's never fun, but you'll glad you've had the vaccine once flu season arrives. Your Zentangle is interesting...not a snake this time, but it definitely reminds me of a beautiful seashell. Have a great week! Jan in WY