Testing and a Scavenger Hunt

The dog is much improved, and I've made progress on the baby quilt for the new grand-niece. The sample block went together well. As I mentioned in my response to the creativity questions in the last post, I do sometimes revert to using someone else's pattern, and that is what I'm doing here. I wanted to try a method by Sheila Murphy as explained in the spring issue of American Quilter. She calls it the "quilt, cut, flip, and reattach" method of making drunkard path blocks. Essentially, it's a twist on "quilt as you go", and I have to admit there's a great attraction to any method that allows you to do the quilting in small sections. When you're done, you're done, is how I look at it, although there's always the chance a method like this will take more time than if you'd just done it the old fashioned way. Here's how my sample block went. 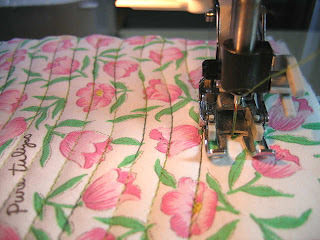 You start by layering a backing square, a batting square and a top square - all cut at 11" - and quilting it any way you want. I decided to put on my walking foot and do a variety of channel quilting - this first one with wavy lines spaced the width of the foot. 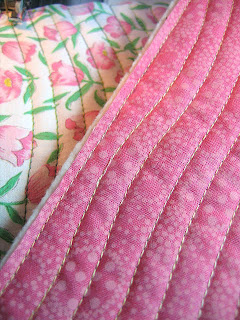 With cotton batting, you can just about get away with no basting, although I added a few straight pins for security. I'm using Superior King Tut thread, green #988 in the top and yellow #982 in the bobbin. 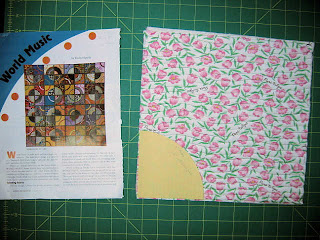 Next, you cut an arc using one of several size templates. I used construction paper weight graph paper and a sharpie pen to draw the cutting line, then cut with scissors. If you had a proper template, this could be cut with a rotary cutter. 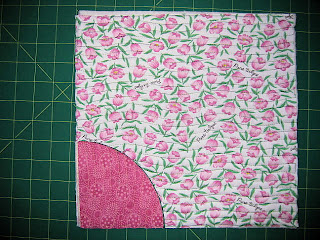 Now you flip the cut out section to expose the "back". 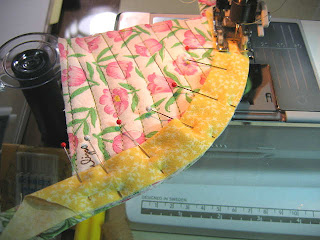 Before reattaching the two sections, bias binding is sewn to both front and back of the cut-out in one step. The author implies this can be done without pinning, but I preferred to keep the three pieces aligned with a little help. One binding is slightly wider than the other. 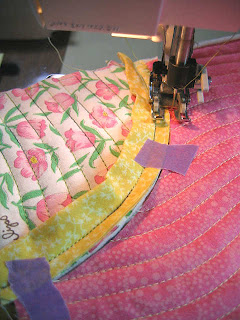 Now the two sections of the block are butted together and held in place with some sort of bridging stitch. She suggests dropping the feeddogs and doing a looping darning stitch, but would allow folks like me to keep our feeddogs up and employ a simple zigzag stitch. To keep the sections from shifting during stitching, she suggests using drafting tape across the join. Drafting tape apparently is less sticky than masking or painter's tape, but of course, I had none on hand. Instead, I'd bought some Duck brand Perfect Release painter's tape which is meant for more delicate surfaces. I'm guessing it would be very similar to the drafting tape and worked fine for me. You pull it off before sewing over the section it is holding in place, and it can be reused a number of times before it loses its grip. 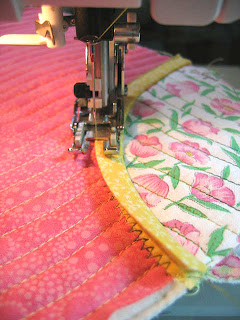 Now the top binding can be finger-pressed into place covering the join and top-stitched down. 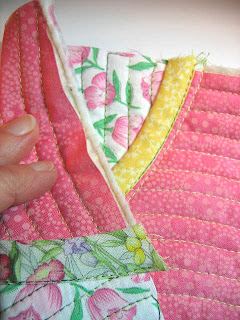 And finally, the bottom binding gets the same treatment. Because it is slightly wider than the top binding, the bobbin threads provides a little echo quilting near the edge of the top binding. I was a bit surprised that she would not have you stitch through both bindings at the same time, but perhaps that would be more difficult to pull off than I think.
Now that I know this method works, I can see that with assembly line sewing of the different steps, it should go quite quickly. The original quilt has 64 blocks; my smaller version will have 20. Even so, I ran into a snag finding enough fabric on hand for the 40 11" squares I would need. So much of my fabric is fat quarters, not regular yardage, and to my chagrin, I could only get one square out of each of them, although I have enough left for some of the binding strips. This took me on an archaeological dig into every nook and cranny where I've stored fabric, and then some boxes with fabric set aside for specific projects. Oh, my...I ran across one ancient collection for which I had no recollection of why it'd been grouped and stored, that is until I found some paper pieced house blocks tucked in the middle. I truly pity the poor person who must deal with all this after I'm gone! I was successful though in coming up with enough pink and green fabric to make my 20 blocks. Next step...marathon quilting!
Posted by The Idaho Beauty at 7:06 PM

Impressive, Sheila! Is it really easier than the 'normal' approach?

Well, Anne, I'd have to say, so far, yes. Being able to shove those curved sections together rather than pinning a normal seam with the potential for tucks and distortion is a time saver. Quilting an 11 inch square is definitely easier than quilting a 44 x 55 inch quilt. However, I'm reserving final judgment until I have to put the blocks together using the same butt and bias binding method.

At least there's no hand stitching of the fabric over the butted seams like in other quilt as you go methods I've seen.