The Last of the Nine 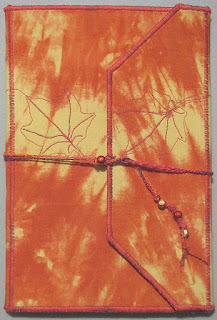 Before I could put the finishing touches on this last padfolio of my group of nine, it sold! In fact 5 of the 9 have new homes, and I've been asked to make one similar to the first to sell. Goodness - that's getting the old year wrapped up on a high note and the new year off to a great start. 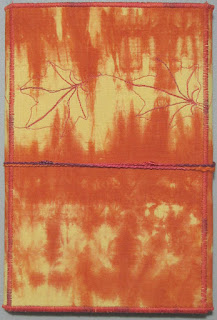 Part of the reason I wanted to use a cord wrap for the closure is because I did so little quilting on this one, leaving that center section devoid of any design I'd worry about covering up and in need of a little interest. 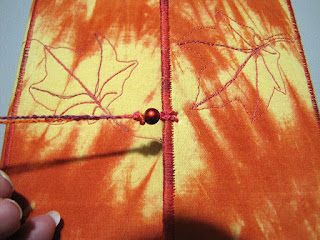 I'd decided to just thread the decorative yarn through the flap, leaving a loop on top to pull the ends through - I believe it is called a lark's head knot. Uninspired but would get the job done since I had no buttons that would do. My mind was still working on the problem though, doing a mental inventory of larger beads I might have in my bead stash. I was so sure I had nothing suitable that I didn't even look through the little boxes holding that sort of thing. However, as I was finishing up, my randomly roving eyes stopped on a small plastic bag sitting at the end of the table. It had several things in it that I'd set aside for a specific project, all in the rust and brown color family - a decorative pin, some leaf beads, chenille thread, brown Nymo beading thread (which was why the bag was out - needed that color of thread for Masks). I picked it up, wondering about the leaf beads, but instead spotted these beautiful glass beads. I slipped one on the yarn, snugged it up to the lark's head knot and liked what I saw. 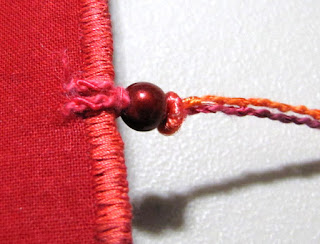 An overhand knot keeps it from slipping down the cord. 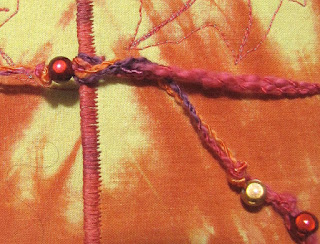 I wrapped the cord around, under at the bead and then pulled it back to the right to secure under the cord. I added a few beads to the end, securing them in place with more overhand knots. There are actually two colors of these beads, and only 4 of each. They were a gift from a quilting friend back in Wisconsin who knew how much I loved these colors, but confided she stopped at eight once she noticed how expensive they were! I don't know if I'll ever make that other project, or if I do, if I would use what I squirreled away in that little bag, so I have no qualms about these beautiful and perfect beads ending up on this padfolio instead. 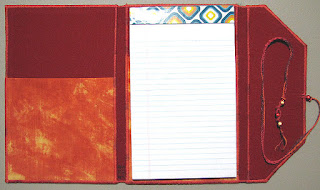 Posted by The Idaho Beauty at 7:12 PM

Great start to the new year! I'm not surprised, however, as they do look scrummy.

Happy New Year Sheila!
I knew that your padfolios would meet their happy customers soon!
Beautiful color of this one.
Thanks for sharing it!
I am happy that you started 2016 very productive, unfortunately I cannot say the same as here in Guarulhos we are in Summer, very hot Summer and I become so tired these days!
Thanks again Sheila!

Thank you, Olga and Lucia! Olga, I am so often puzzled by what sells and what does not. Too often what I think is a sure fire out the door piece merely gathers dust. So I try to be cautious in my enthusiasm of items like these. I know how much they make my heart sing, but that sort of thing often is a personal preference. So validating to get this response.

Lucia, I so know what you mean about the heat and how it can suck all the energy out of you. Cold on the other hand can invigorate - unless it leads to snuggling under a quilt to read a good book! Yes, this one is among my favorite color schemes. I don't know why I haven't made padfolios in the rusts and oranges more often - was surprised when I looked back at the ones I've made to find that so.

I love your padfolio- I'm not surprised they sold so well. Congratulations!!!