It's that time again, the anniversary of my husband's death and a time to pause and remember. Have I already told you that we met at college after I decided to join the Jazz Band our junior year? I don't know what possessed me to answer the call in the student bulletin for a saxophone player, and I tried to talk the conductor out of accepting me (don't own an instrument, never played jazz), but he poo pooed all my excuses and before I knew it, I had a school sax and a folder of music to brush up on before the first rehearsal. My time in the jazz band turned out to be the highlight of my college experiences, even if Allen had not decided to set his sights on me and eventually propose.

Truth be told, I actually had my sights set on two trombone players in the band, and did my best to chase both of them down, including a sneaky setup during a bus tour to ride with one on the first leg of the trip and the other one on the return trip (More than one bus to hold us all made this possible.). Imagine my irritation when this other guy (who I'd noticed joining whatever group I happened to be engaging with and who I'd pointedly been ignoring) boarded the bus, asked if the seat next to me was taken and when told it was, replied, "Too bad" and promptly sat down in it. The start of a beautiful relationship? Not exactly, as once we got back to campus, I continued my chasing of the trombone players while he continued his chasing of me. Eventually he caught up with me, and I discovered what an interesting and talented person he was (not to mention the fact that he appeared to love me and had similar life goals to mine). He won me over and we married shortly after graduation. 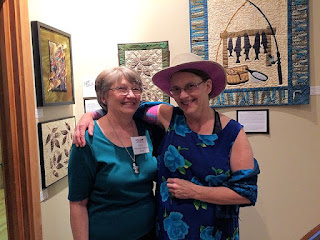 I tell this story because of someone who unexpectedly showed up at the ArtWalk reception. That's Shelleye in the above photo who was in the symphonic band at college and thus was on those band tours with the jazz group, some members who, like Allen, also played in the symphonic band. Shelleye tracked me down on Facebook a few years ago and frankly, I didn't have much of a recollection of her. I think she knew me more through Allen who she would have known better. That did not deter her though from becoming a fun Facebook friend, and thus I soon learned that although she was living in the southern part of the state, her hometown and her parents were just 30 minutes or so north of me. She even managed to strike up a conversation on an airport shuttle with one of my art group members. But she and me getting together? We just hadn't made it work in spite of her frequent trips north.

Until Friday night and the reception. Oh, how wonderful it was to talk to her in person! She is as fun as she looks in photo (and a quilter too!). And before long, we were telling college stories about the band (and the questionable purple dresses we had to wear) and Allen and how, unbeknownst to me, everybody BUT me apparently knew Allen had his sights set on me. Slightly embarrassing that, but after we'd both gone home, I realized what a gift it was to have Shelleye show up at the reception, so close to this oft difficult anniversary. I have fewer opportunities as the years go by to reminisce with people who actually knew Allen. Certainly none of the friends I've made here knew him. So it was very special to see Shelleye after all these years and hear some things about those college days I was unaware of. Thanks Shelleye!
Posted by The Idaho Beauty at 1:00 AM

Email ThisBlogThis!Share to TwitterShare to FacebookShare to Pinterest
Labels: Misc

Thanks for sharing this heartwarming story….one I hadn’t heard before…...

I'm definitely impressed, because I had a wild hair to learn sax years ago, but never followed it up. And I LOVE jazz, contemporary/cool jazz, my fave genre. I once tried out for a jazz singing group but my voice wasn't nearly good enough.
Glad you got to reconnect with an old friend.
Hugs,
Connie

Such a lovely story! Don't you think things happen when they're supposed to happen & Shelleye coming into your life this past Friday night was the 'right time'? What a wonderful way to remember your late husband with someone else who knew him! Thanks for sharing! Jan in WY

What a sweet story about you and your husband. Hope you're holding up okay.

Ah those carefree college days when we lived as if we had all the time in the world! Now we make time to remember with real pleasure.

How great that you were a jazz sax player. That is one of my long ago discarded desires. I confine myself to listening, and drawing them now.

All these comments are much appreciated. I especially got a kick out of learning that Connie and Olga once aspired to be jazz sax players! I was not nearly as good as all those music majors that were a part of it, and I never had to stand up and do an improv solo, because I would have been awful at it. Instead, I had a deal with the 1st chair that on the rare occasion that a score gave second chair a solo, we'd switch parts! But I learned so much in the actual playing and had great times with the band when we toured and played concerts.

Sherrie - holding up well this year . . . so far! A few more days to go but it has been a good week with good memories and enjoying some music he loved that I haven't played in a bit. Even found a bad Jackie Chan movie (is there any other kind? lol) to watch for fun because we went through a phase of finding and watching every movie he had made. It all feels so special at this time. Glad you and Mary enjoyed the story!

And yes, Jan, most providential for Shelleye to show up - just what I needed to get this week off to a good start and also to give my time at the reception a boost. It all felt so right. As for other things happening at the right time, that call for a sax player and me following up on it coming at that time was perfect timing. Allen had recently been dumped by a long-time girlfriend and was on the rebound! We always told Doc Evans, our leader, that we gave him credit for us meeting and falling in love. :-)

How lovely to hear your story, Sheila.

Those precious student days seem so far away now. I too met my husband of 45 years at university and had four wonderful years in Cambridge where we both studied. I also met dear and irreplaceable lifelong friends whom I still see regularly. They were such good and life-enriching times. I feel very privileged.