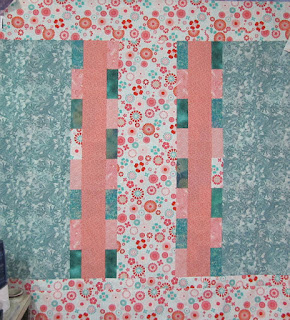 I finished composing and piecing the backing for the Kaffe inspired baby quilt and the outcome was actually a surprise. You see, I knew I'd begin by squaring up the end of the yardage from a previous baby quilt, the fabric I'm not so keen on and want to see go away, to make a selvage to selvage panel running down the center. I knew there'd have to be more added to its length but in the meantime, I searched the fabrics left from making the top for other somewhat large selvage to selvage pieces to make up the width. I imagined big blocks of fabric randomly placed with some of those leftover rectangles fitted in here and there. May as well start piecing those rectangles while I decide on the rest, and by one of those very happy coincidences discovered that eight of them sewn end to end were about the same length as that center panel and I had enough to make two sets, one for either side of the center panel. and that is where the idea of asymmetrical placement of different sized larger pieces started to unravel.

I tried, I really did try, to keep the green and the orange panels uncut, thinking to place them on either side next to the strips of rectangles but the imbalance was too much for me. The green piece was quite a bit wider than the orange piece so the center panel and its rectangle strips would no longer be in the center, plus the difference in value between the green and orange would make one side visually heavier than the other. Couldn't do it. Cut each one in half so that they could symmetrically be added to either side of that central piece. And how many rectangles do I still have? Just 2 shy of being able to make two more strips. I cut the missing rectangles from a strip of the center fabric and pieced the strips that would go between the orange and green panels. You will note I did arrange the light and medium rectangles to be offset in the adjacent strip. I like a bit of offsetting, but asymmetry has always been a struggle for me.

So now all that was left was to add to the length. I had two very long strips of the flowered fabric, trimmed from the previous baby quilt when squaring it up after quilting, plenty long enough to span the width of this backing, and 3 shorter strips of about the same width that could be pieced together to make them equally long. Continuing with symmetry appeared predetermined. In order not to end up with a seam too near the edge of the top, I did split the pieced strip lengthwise to add to top and bottom of the backing before adding the wider strips to that, making the finished length of the backing just two inches top and bottom extra (more on the sides), enough to give me some wiggle room when layering and quilting. 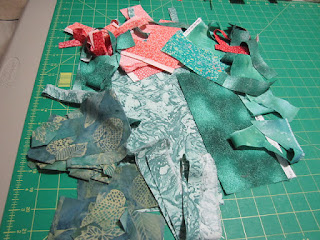 I have to say, this backing would make a great top so this baby is getting a two for one quilt. I just love the way it came out. And of all the different fabrics I used in the top and backing, this is the pile of scraps that remain. A pretty good job of using up some fabric!

Posted by The Idaho Beauty at 6:09 PM

I always piece my backs & it's a great way to have a 'bonus' quilt! Love your design! Excellent use of scraps! Jan in WY

Thanks Jan! I have always done complicated pieced quilts. Taking more time to piece a backing usually feels like a bridge too far as I am eager to get on to the quilting and be done. This was surprising proof of how quickly I could put together a simpler design that is still interesting and fun and absolutely no reason why I couldn't take this approach for some of my tops.

I’ve always said dear friend….YOU are too hard on yourself…..go with your heart!!!