On To The Quilting 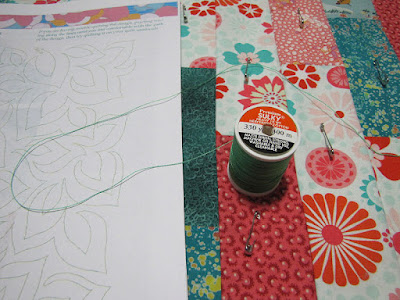 This top had been covered up on my design wall by the backing for so long that the image of it in my mind was quite different from reality. Thus the leaf design I'd been auditioning in my head, a bit inspired by this free motion design from Angela Walters just wasn't going to work. I've often used a meandering leaf motif in my quilts but not an overall design like this. But it turned out to be the perfect solution because my idea to stitch a leaf on either side of the vertical seams while simultaneously stitching in the ditch wasn't practical. Those seams between the lozenges were much shorter than I remembered. As for the thread, I was surprised that I did not have something more teal green to use. All my choices were either very blue or very green. I was a bit surprised at how well this light bright green was going to work. It's a Sulky 12 wt cotton thread with a very slight variegation, but a sheen that initially made me think it must be a polyester thread. I honestly don't remember buying it, and it wasn't stored with the rest of my threads but in a bin of extra spools, oversized spools and other odd threads. I'm thinking it may have been a freebie included in an order, or perhaps one that was part of a grab bag special. It looks to be used but I truly can't remember on what.

On the first day of quilting, I have to say nearly everything that could go wrong did go wrong, really taxing my patience (and reminding me of the things in this post on Patience). First, after moving some things stacked on the plastic extension table around my machine, I noticed something sticky on it like what's left when you try to peal away a label. I'm still not sure how it got there but I suspect it may have transferred from some exposed fusible web. It did not come off easily but eventually I got the table clean enough to start the quilting. But within maybe 6 inches from starting, my needle broke as it hit a spot with a bulky seam. Well, maybe I should switch from embroidery needle to a titanium topstitch needle. But within another few inches up the section, the thread shredded. Ok, maybe I need to go back to the embroidery needle and just be more careful. As I was rethreading the needle, the thread wouldn't move and I realized that it had somehow slipped under the cap that lifts up so you can secure the thread before storing the spool. Maybe that had something to do with the thread shredding and breaking. Decided to stick with the embroidery needle and had not gone very far when the bobbin thread ran out. Oh sure. I'm using a lighter King Tut thread in the bobbin and so when not filling the bobbin with the thread running through the needle, there's a specific group of guides to use, and because I was sort of day dreaming as the machine ran, I didn't notice that the thread had jumped out of the last guide which meant it was building up on one side of the bobbin rather than winding evenly back and forth on it. As that half built up, the thread jumped off the bobbin and started winding on the spindle! What a mess when I finally noticed what was going on. 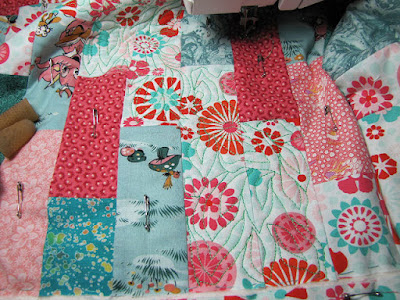 That seemed to be the last hurtle though, and I could finally get into a rhythm and get this first wavy strip quilted with leaves. I'm such a stitch in the ditch sort of gal that I wasn't sure I would like this overall stitching over seams, but I do! 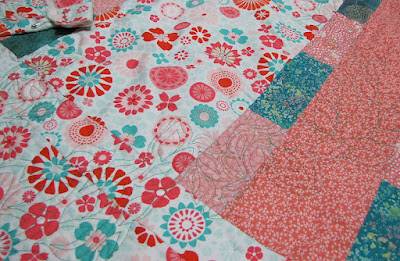 Here it is from the back. Not sure how leafy a lot of my leaves look but it will do. And I love this batting to quilt through and how it maintains that little bit more thickness after being quilted. 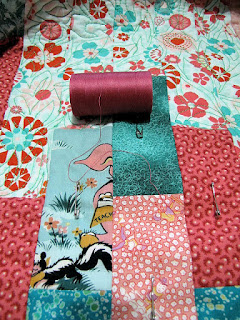 On to the lozenges. I'd seen somewhere a loose and elongated heart quilting design and decided that was what I'd put in those areas. This thread is Connecting Threads Essentials 50 wt cotton thread in fuchsia. It's a beautiful thread to piece with and works well for quilting. The extra-long staples creates a very low lint thread. 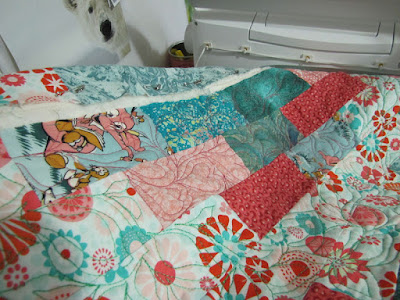 I briefly worried that the thread might be too dark, i.e. show up too much (which is my usual worry with quilting) but it really works well over all those different fabrics in the lozenge. And these hearts were much more fun to do than the leaves. They look more like feather quilting than I anticipated, really lovely. For now I have quilted the partial lozenges on one side and one along the top which was about what I could manage in a sitting, will take another sitting to get the rest of the way round, then probably two sittings to complete the four full lozenges in the center. A little every day and the progress is steady.

Love your quilting--especially the hearts! I salute you for doing your own quilting! That's way above my skill set, so I "quilt by check" & am always happy with the results! Thanks for sharing your progress! Jan in WY

I see you are making progress, despite all the impediments, starts and stops. If anything could go wrong it did -- Good thing you are comfortable enough about sewing and quilting, that it did not stop you altogether.

You inspire me to do a little free-motion this wkd. I have some place matts I wanted to finish before Christmas, but have not been motivated to finish them.

It sure does sound frustrating but the results were certainly work it!!! Very impressive girlfriend!!