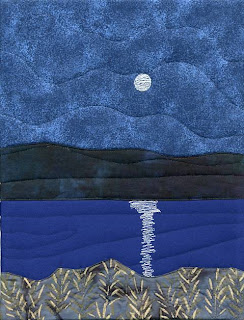 Normal journal day would have been last weekend when I was away for my birthday. I returned home from that trip to the moon rising over the lake, casting its reflection in the calm waters, and I was reminded again how blest I am to have found this magical spot. So as the week progressed, and I contemplated how to interpret August's calendar theme of Wisdom with a quotation from Ralph Waldo Emerson, that image of the moon came to mind. As per the quotation: "The invariable mark of wisdom is to see the miraculous in the common." I had extra motivation to work on my journal quilt Saturday; my jounal buddy Judi, who has had to put her own journaling on hold until she gets settled out in Oregon, was passing through just an hour from me and we'd arranged to meet. I'd be able to show her this and the rest of the year's journal quilts in person - what a treat! 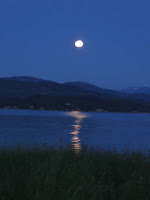 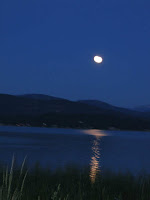 I started with some photos I'd taken earlier when I was more interested in capturing the color of the relection than getting a good sharp picture. Yes, no time to set up a tripod so the pictures are a bit blurred. I narrowed it down to these two shots, neither of which were composed exactly right, but which had elements I wished to incorporate. 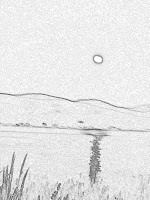 Using my Paintshop Pro program, I reduced these to black & white, then applied a "black pencil" effect to bring out the main shapes only. 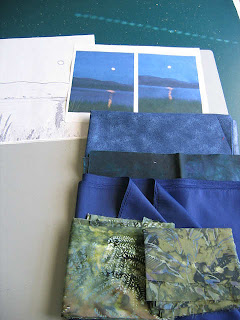 Next I auditioned fabric choices. The blue for the lake is some sort of synthetic dress material with a slight sheen which I hoped would make it look more like water. I changed my mind later about the fabric for the foreground, as you will see.

One of the things I wanted to experiment with was YLI's Brilliance thread. It is a metallic that glows in the dark and I have never fully come to terms with it. I'm thinking of using it in the angel quilt, so this seemed like a good place to work through my previous problems with it. I would use it to embroider the moon and reflection and these two colors were as close as I could get to matching those in the photo. 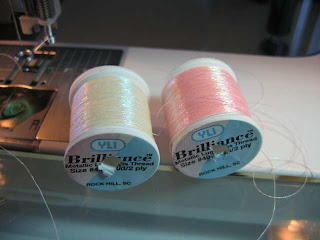 As I often do, I combined several methods to suit my needs. While I planned to use the Accidental Landscape method (see this post and this post) to create the top, that polyester fabric was ravelly and would not hold a crease when trying to press under its raw edge. I needed to stabilize the areas where I'd be free-motion stitching the moon and reflection. So I decided to try fusing the various sections to Decor Bond. 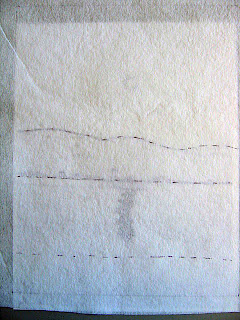 I wanted some guidelines, though, for fabric placement. I didn't want this landscape to be very accidental. Decor Bond is translucent enough for my b&w printout to show through. I used a permanent black Sharpie to draw the finished size of the journal quilt on the Decor Bond, then moved the printout underneath until I had the orientation I wanted. I used the Sharpie to mark the outlines of the foreground, lake, mountain, first on the fusible side (since I did not reverse my b&w version before printing it), then again on the other side. The polyester & sky fabric went down first, my teflon pressing sheet protecting the iron from the exposed fusible. I cut a freezer paper template of the mountain section to help guide turning under both edges, then positioned using the marked guides on the Decor Bond and fused. The foreground was cut freehand, trying to capture a bit of the ragged line grass produces, and pressed under before fusing. Because of the overlaps, those pressed under edges are loose. 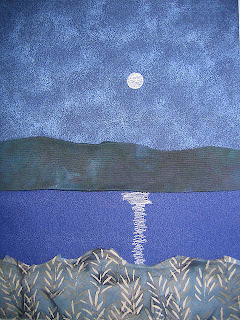 Here is how it looked after stitching the moon and reflection. If you look closely (click on any picture for a larger view), you can see that the edges of the mountain and foreground are not sewn down yet - that will be part of the quilting. The camera is not lying about the color of the thread, by the way. For as different as each thread looked on the spool, it was difficult to see any difference between them on the fabric. And I think the #80 metallic needle may not have been big enough because I still had some problems with tension. 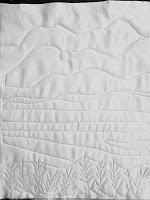 The last step was to layer the top with Thermore polyester batting and muslin and quilt it. I started with the loose edges, free-motion topstitching close to the turn under with smoke monofilament thread. And partly because I was feeling lazy and partly because I wanted to keep it simple, I continued to add minimal quilting lines using that same monofilament thread. Here's the quilting as seen from the back.

There was one other thing I wanted to try on this quilt and that was a faced edge finish. I'm seeing this on more and more art quilts where adding a binding ruins the overall effect. For you readers familiar with clothing construction it is like adding a facing to a neckline or armhole. I followed some basic instruction shared by Alison Schwabe here which is her solution to finishing irregularly shaped quilts. It's a lot like the pillow turn method, except after turning, the center of the "facing" is cut away, leaving around an inch of facing to secure to the back of the quilt, and then the facing is understitched to the seam allowance. This helps keep the facing from rolling to the front.
I had some success with this, but I think I should have clipped the corners (which were difficult to poke out) and graded the seam since I had the extra stiffness of the Decor Bond in there. Although the picture above of the finished quilt shows nice straight even edges, the real thing is less perfect. Let's here it for cropping! That is basically my issue with any edge finish I've tried other than binding. I simply can't get that evenness that is my aesthetic. I know there's another way to do a facing, and before I totally write it off, I'll have to dig it up and give it a go, because frankly, I do like the look it gives to certain pieces.
Posted by The Idaho Beauty at 4:32 PM

Ah, the moon... it looks disappointingly small in photos, doesn't it - whereas in "reality" it seems very large!!

Ain't it the truth! I had to restrain myself from making it twice as big...