Another Day In Paradise 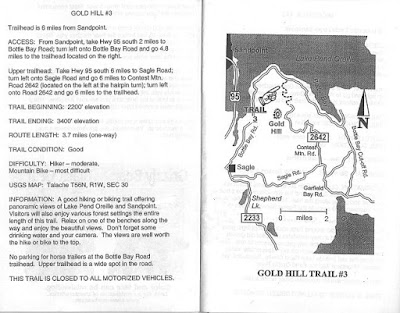 Well, at least MY idea of paradise. Friday was to be our last sunny day in the 70's before another cold front swept through bringing a week of cooler temps and rain. So it was off to the woods again to hike an unexplored trail that's been on my list for awhile. Gold Hill is directly across the lake from Sandpoint, so a hop, skip and a jump away. In fact, we sailed along it on my birthday cruise. There'd be no babbling brooks this time but the promise of a viewpoint, so I traded my sketchbook for a camera. 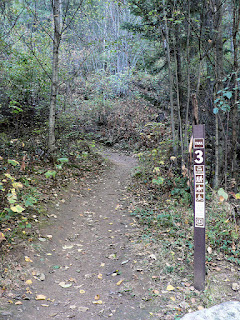 The drive along Bottle Bay Road was a bit harrowing - a narrow winding road without shoulders or painted center line and few guardrails with speed limits between 25 and 35 mph. I really wanted to take glances of the lake but didn't dare take my eyes off the road. The locals who live along this stretch know the road like the back of their hands and one impatient truck roared by me without a pause. It occurred to me that when I was young, most main roads were just like this one. I was very relieved to pull into the trailhead parking lot after almost 5 miles of this. I gathered all my gear and headed up the mountain, the moderate-rated trail immediately showing me this was going to be a true hike. 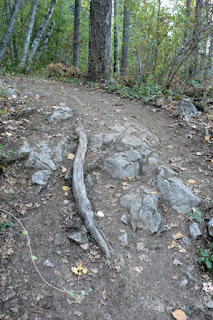 The trail was a steady ascent zigzagging its way up through the quiet and shadowy woods, the southern exposure getting little direct sun. For the most part it was soft packed dirt but occasionally there'd be outcroppings of rocks and exposed tree roots. The trail is rated most difficult for Mountain Bikes and I'm thinking this sort of thing along with the incline are some of the reasons why. I was hoping there'd be none on the trail this day as I'd had a near collision with a couple of kids on bikes on a different trail. 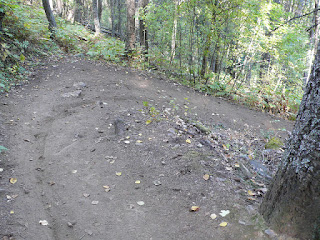 The climb would be even steeper if not for the switchbacks allowing the trail to go back and forth across the face of the hill. I would not want to be on a bike heading down and through these sharp changes in direction. But that's just me. I did actually pass two bikers on the way up, let them know with a laugh that I thought they were crazy, but they were not kids seeing how fast they could go. They were taking it slow and steady and letting me know how many of them to expect as they were fairly spaced out. 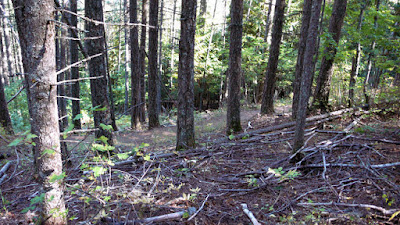 Because of the relatively moderate incline, I could usually see where the trail would cross above me and where I had just been. At one point I heard voices and looked up to see two twenty-somethings running down the trail above me, water bottles in hand. Too much energy, I told them as they passed. 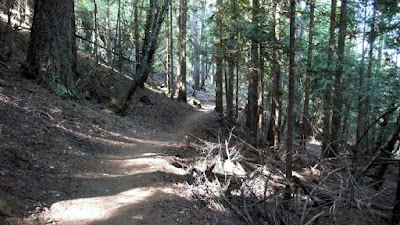 I didn't do much looking or any picture taking on the way up, focused on getting up to the first observation bench which I estimated would be a little more than a mile along the trail. I haven't done this strenuous of a hike in quite a while and this was a test of my strength and stamina. I kept checking now and then to see if I could spot the lake through the trees but they were fairly dense. I'd have to wait for that viewpoint if I could make it. 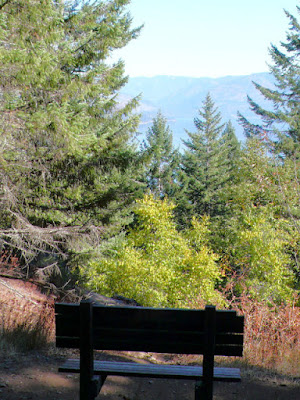 And I did, with this as my reward. Darn trees. I'm sure when this resting spot was put in on the trail, these trees were not blocking the view. I've seen this at other viewpoints too, where the forest has grown up to block the view. Still, it was a pretty nice spot. 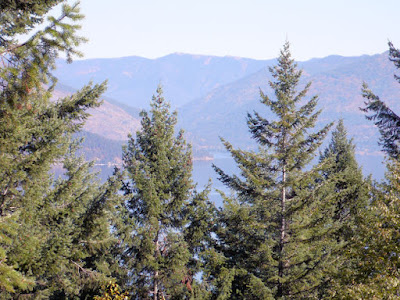 Here's a zoomed-in shot. This is looking northeast of Sandpoint where the Pack River drains into the lake forming a delta rife with wildlife. 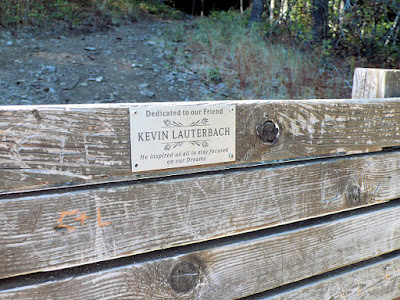 The bench has a dedication plaque to someone I don't know. But I took courage from it's message: 'He inspired us all to stay focused on our dreams." Well, that's what I was doing here, wasn't it, fulfilling one of my dreams of exploring in the surrounding woods? While I sat taking a break, taking in the view and snapping a few pics, a  young couple arrived on their way up. I asked if he'd been up the trail before to see if I could get an idea of how much farther it was to the next bench and he said, oh yes, he'd been up the trail many times but not for quite a few years. She was quick to add that this was her first time. Couldn't help but think, ahhh young love; the boy wanted to show his girlfriend or maybe wife where he'd spent his youth. They were full of energy and headed on up the trail. I didn't feel very worn out so I decided to go on up the trail too, at least for a little bit. I've always been lured by what might be around the next corner if I just went a little bit farther. But I knew I didn't have it in me to make the next viewpoint, and checking the time knew I needed to head back down. 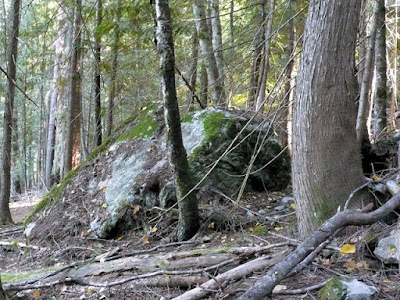 Now that I didn't have to expend so much energy, I could look around me more and take a few pictures. There were lots of granite boulders, some quite large, which may or may not have been left by the ice-age floods. 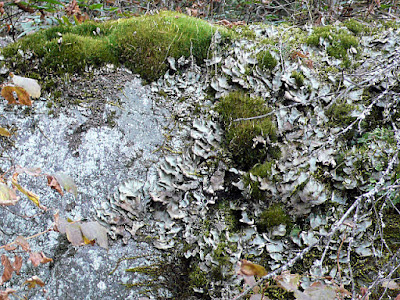 And because of the shadiness, most of these were covered in moss and interesting lichens. 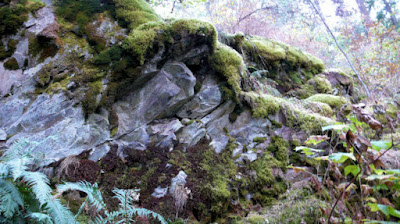 And I was reminded again of my fascination with rock layers turned on end, a sight I grew up with in these north Idaho mountains. This one is not as extreme as many in the area. 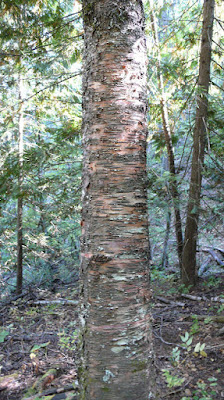 There were more birches and aspens mixed with the spruce, pine and cedar than I expected, one startling me with the silent drop of a single yellow leaf beside me. I was more startled that I'd missed this richly colored trunk on the way up. 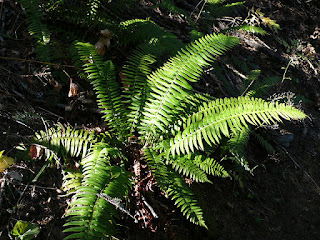 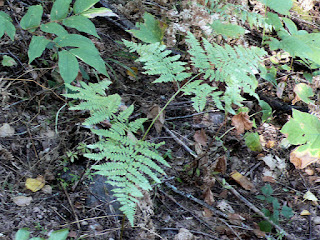 And of course, if it is cool and damp there will be ferns. I didn't notice until I was reviewing my photos at home that these two are slightly different. They seemed to insist that I will sketch the simpler of the two once home and perhaps even thread sketch it. I've not really been a fern person in my textile work but for some reason, studying the symmetry in a single frond reminded me of a Zentangle design I'd liked and why not work with this? 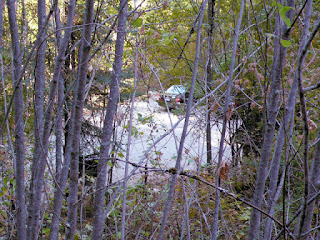 I had dawdled quite a bit on the way down, taking much longer than I had anticipated, but finally the parking lot came into view. 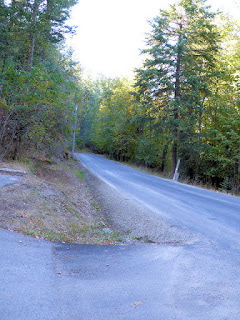 And I'd be heading back down that narrow winding road, the one with the blind curve preceded with a warning sign of "road narrows" (even narrower than what I've been white knuckling???) and the bit of guardrail looking as if it's sliding down the embankment into the lake. I'm not sure I want to brave that road again just to see if I can make it farther up the hill next time. I can access the top of the trail by a different road which may not be as harrowing and will provide me with a spectacular view from the start.
Posted by The Idaho Beauty at 7:19 PM

Your photos and descriptions could be about region here in NC. So delighted for you that you could get out and hike…..

Actually, you and your forced marches were much on my mind as I made my own forced march! Was thinking from the pictures you've posted that there would be a lot of similarities. And it would be fun to share a hike with you. :-)

I'm glad you have the strength now (and clear air) to get out and hike. It looks like a nice trail.

Me too, Sherrie, although I had some complaining muscles afterward. I know you can empathize! The woods are where I need to be and I've missed being able to get out in them. I only wish this trail had more views of the lake along the way but the trees were mostly too tall and too thick. Other than that, it was an interesting and challenging (for me) trail that I've been curious about for a long time. So thankful things came together.