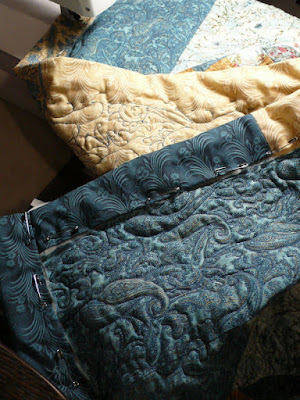 So here's my sad tale. At least, I think it's sad. Life is full of peaks and valleys, highs and lows, and quilting is no different. No sooner do you have a success and are riding on a confident high than the tides turn and you are sunk down frustrated and wondering what happened. I'd finished quilting the fat quarter quilt top inside of the borders, an accomplishment in itself. I'd been pleased that I got faster and better the more of it I quilted. Now "all" I had left were the borders, and once I picked out the thread, it would be easy and go quickly because I'd be quilting around the paisley shapes in the fabric print. I was days away from being able to add the binding and toss it on my bed.

My first session quickly showed I'd slid off that peak of confidence and was struggling to quilt even a small area. I'd chosen a dark thread for the bobbin to match the top thread, wary of it pulling to the top and showing if it was a lighter thread to match the lighter panels of the backing. I'd chosen the dark thread for on top because I didn't want it to pull the eye away from the metallic gold outlining the printed paisleys. The two threads were a great match for both the border fabric and the dark blue panels on the back. I thought I'd be able to see where I had stitched as I moved around the design, but I couldn't. And when I checked to see what was going on with the thread on the back, it not only glared at me on top of the tan fabric but showed tension problems I'd not had with the thread I'd quilted the rest of the quilt with. I quit in frustration and wouldn't face it all week as if I was punishing the quilt for misbehaving! So much for my increased machine quilting skills and confidence.

I did eventually sit down with it again, with an idea for a different approach and a possible solution for the tension issues (I'd changed to a slightly heavier thread without changing to a bigger needle so switching out the needle appeared to help a lot). I'm still not crazy about how the outlining of the fabric design looks on the back and is so blatant with that dark thread, but at least I'm moving over the border with a bit more ease. It's slow going even so and will take probably twice as long as I projected. I may have to take it out of the machine and set it aside after all because I now have a December deadline for the exhibit I knew was coming up sometime before the end of the year. I have several things mostly done but nothing ready to go. I'll give it another week and then I'll have to switch gears.

So that's my sad story. But I'm bouncing back!
Posted by The Idaho Beauty at 6:41 PM

You are philosophical, but it is irritating how when making one-off items they seem to impose their own pace on us.

Oh drat….don’t you just hate it when a project comes to a halt while trying to overcome technical challenges. You are a great technician…..you’ll solve the problem and the quilt will be better for it!!!

Oh, boy do I know how you feel. It seems as the creative process gets easier, the technical things get harder. It gets easier coming up with the ideas and make good compositions, but the things that used to be easy like quilting become illusive. The things that we did so easily when we did traditional quilting are things we mess up now. I hope you understand what I mean by my comment.

At any rate once the quilt is washed it will look great as the quilting sinks into the fabric and batting. Continue on even if it goes slowly!

I think you're too hard on yourself. I thought it all looked pretty fine to me. There seems to be some good advice in the comments above.

Olga, at my age I've come to accept that being philosophical when life throws you these curves is the best way to deal with it. Not that I don't go through the "in the moment" frustration when I'd like to throw quilt and machine out the window! I love how you put it, that the project imposes its own pace on us - so true and yes, so irritating. But again, less stressful in the long run to be philosophical, as I was able to practice the other day on a shoe sketch. Was riding high with increased confidence with each shoe sketched and then one totally put me in my place, not as a fail but certainly not a very good rendition. Thankfully, the next day's shoe was a major success!

Chris has it exactly right. Since I don't enter quilt shows anymore, I haven't had to be so concerned about how things look on the back. And that can breed a certain amount of sloppiness or rationalization that it doesn't matter that much. I keep telling myself no one but me will probably see the back side of this quilt, but since it IS one that will be used as a bedcover, the chances of the back being seen are much greater than if it were to hang on the wall. I'm hoping, Chris, that you are right that the stitching will magically sink into the batting once I wash it.

Well, Hilary, I did NOT take a close-up of the stitching on the back but there are many places where the top thread is showing like hen's teeth, made all the more distinct because of the dark blue thread on the tan fabric. If you click on the photo and zero in on that section of the back that's showing, you might be able to see what I'm referring to. But thanks for the thumbs up. I know it is not as horrible as my first impression thought, and since I changed needles, the quality of the stitch on the back is much better. I do really like the way the paisleys are puffing up on the front. I think that's wool batting in there.