Working With the Past

It's been 8 years today since I lost my husband, and I always spend this less than wonderful anniversary working on something that makes me feel close to him in some way. Today, I dug out the box of leftovers from making memory pillows for my in-laws using his and his dad's ties. I used the New York Beauty block and mixed tie silk with my hand-dyes, very random pairings based on what was on hand. They came out like this: 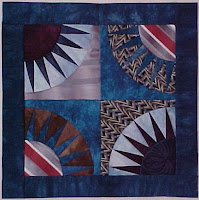 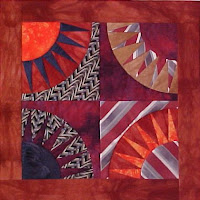 I cut more pieces and made more arcs than I'd need because I knew I'd be making a version for myself. That was back in 2004 and I didn't realize it would be so long before I opened that box again. It took me about 45 minutes to sort through what was in there, figure out what I had been doing and where to start up again. This is the second UFO I've recently had to spend so much time reconstructing my original intent. It's much better to not let these things languish for so long. I discovered many sets of precut hand-dyes for the background portion of the arc as well as cut and marked inner and outer units. But not a lot of tie fabric. 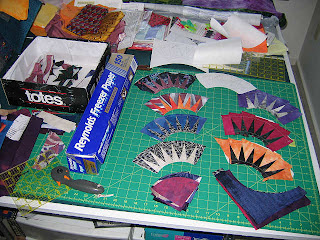 Here's what I eventually got done today. I needlepunched additional freezer paper patterns for paper piecing the arcs. I eked enough pieces out of the remaining tie fabric for three more arcs and got them pieced. Then I got out another stack of my husband's ties and disassembled 3 of them. In the above picture the leftover arcs from the original project are on the left, the ones I pieced today are on the right.
I have been fusing lightweight knit interfacing to the back of the tie silks to stabilize them and control fraying. So this new batch of tie parts will need a quick wash and iron and application of interfacing before I can proceed with the piecing. I don't have a size in mind for the finished quilt, but it will probably take at least 16 of these blocks. I have a ways to go, but that's ok. Working with his ties brings back nice memories. 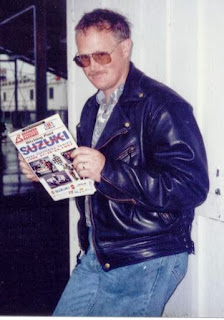 But in truth, I don't think of him much wearing a shirt and tie. This is how I really remember him. Some of my fondest memories involved our biking adventures including trips to the races. Besides sharing those good times with me, I also remember the way he supported me in my quilting, gave me his opinion when I wasn't sure which way to go, kicked me into action when I got complacent or whiny. To be honest, I'm still a bit lost without him. I have to kick myself into gear these days and I'm just not as good at it as he was. Thinking about him with this impending anniversary coming up was a lot of what spurred my current decision to spend these two weeks shutting out distractions so I could make some serious progress in the studio. These two weeks are for you, fella. Here's to a great guy taken too soon.
Posted by The Idaho Beauty at 7:56 PM

Email ThisBlogThis!Share to TwitterShare to FacebookShare to Pinterest
Labels: Inspiration

The quilts are beautiful and what a wonderful tribute to your husband--both the quilting and just spending the day remembering and honoring him. Hugs and kudos to you.

My thoughts are with you. I can't imagine a life without my husband.

Sorry for your loss. I'm glad that you are creating art in his memory. Sounds like a great man and husband. be well.

This is a beautiful post and my heart goes out to you.