The Trip Home - The Badlands 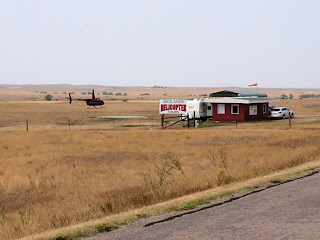 Taking the Badlands Scenic Loop was a sudden impulse, one I second guessed as I neared the gates, realizing that I'd be entering a National Park and thus need to pay a fee to get in. Just outside the gates, one could opt for a helicopter tour of the park which I'm sure cost a bundle and might be awesome, but not provide the same picture taking opportunities or time for contemplation being on the ground would. 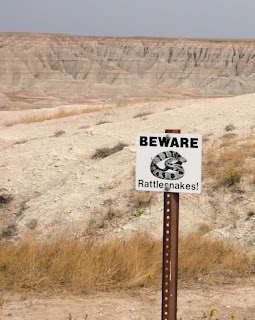 So I ante-ed up my $15 dollars and braved the rattlesnakes to go sightseeing in this extraordinary landscape. Money well spent. Took over 160 pics - don't worry, I won't make you scroll through all of them! I didn't realize there would be so many turnouts as well as several places with boardwalks or trails leading to better views. I could have spent an entire day there. 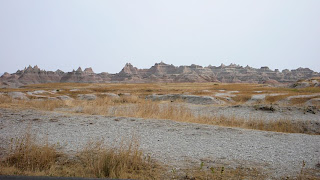 When you enter the park from the east entrance, this rugged line of eroded hills catches the eye. 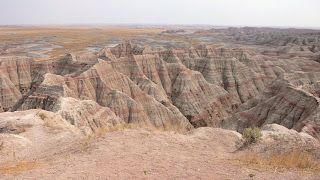 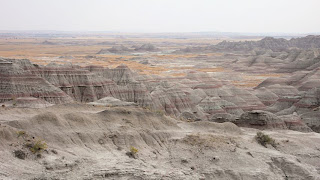 But in many places, that which gives the Badlands its name falls away at your feet. 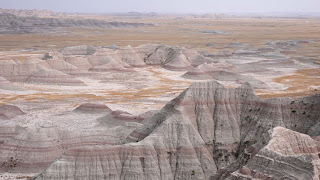 I remembered them as a bit more colorful, but I may be remembering The Painted Desert which isn't too far away.  Perhaps the time of year makes a difference or the time of day. 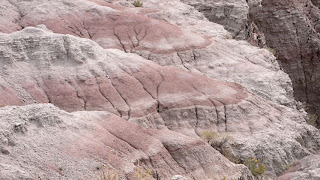 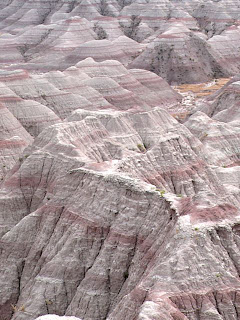 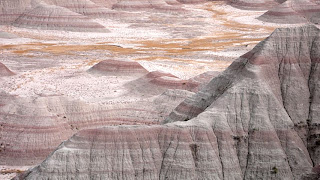 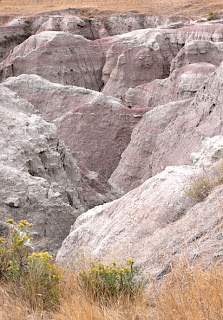 I was particularly drawn in by curves and cracks, lines and overlaps. 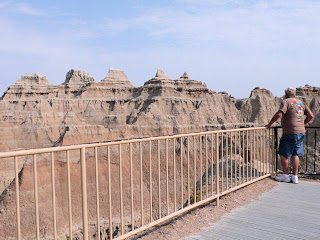 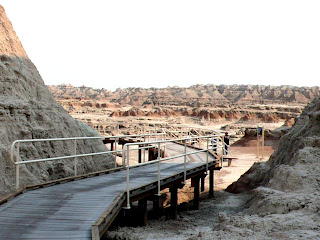 At the first major turnoff, one could walk quite a ways both directions on boardwalks to scenic overlooks. On one end was "The Window" and on the other "The Door". 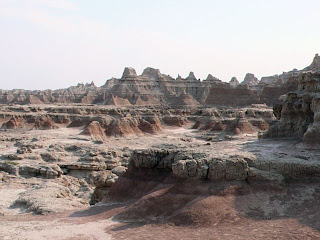 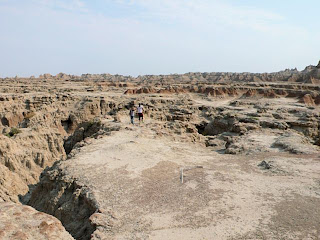 From this second overlook you could actually walk out into the Badlands, snakes notwithstanding. 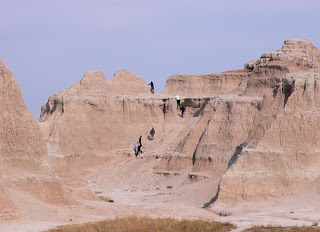 There were few tourist to distract...that is until a tour bus pulled up and a group of foreign students piled out. Ignoring the boardwalks, they ran straight for the nearest high point creating their own overlooks. 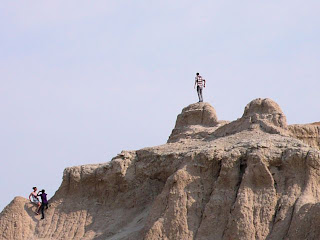 Bear in mind, this was a very windy day, the gusts particularly high in the park. More than once, I was buffeted while aiming my camera, blurring shots. This guy was undeterred. I believe this is the way people get in the news...when they fall from such high places where they should not be. However, no one injured themselves as far as I know.
Posted by The Idaho Beauty at 5:17 PM

I've always wanted to visit the Badlands. Your photos are so inspiring, with their curves and strong lines. Will they become a quilt?

At the time I was taking all those pictures, I thought yes to those lines and curves inspiring a quilt. Now that I'm home, I'm blanking on how to interpret them into a good design. Writer's block, you know. ;-)

It's been a long time since I was in the Badlands. I remember it as I look at these photos. I don't remember the next set, though. You are right -- the Petrified Forest shares these kinds of formations.