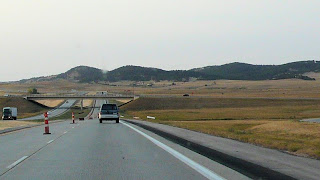 After finally pulling myself away from the lure of the Badlands, I continued down the Interstate toward the Black Hills - a welcomed sight. I wanted to take another sidetrip up into those "hills" - mountains really - even though I was losing light. Not only did I need a mountain fix, I wanted to see Lead where my dad had worked before moving out to Idaho.

I turned off at Sturgis (Harley motorcycle enthusiasts rally here each August) and almost immediately entered a narrow forested canyon, the road winding its way up toward the infamous town of Deadwood. That canyon was just like my Idaho ones so I was so glad I'd headed up into them, waning light or not. Up over a little pass and then you drop into Deadwood. Unfortunately  I had no time to walk around in the older section of town - some wonderful architecture there. But I did feel so at home - these mining towns in these narrow canyons all have a certain look and feel, whether they are in South Dakota, Idaho or British Columbia. 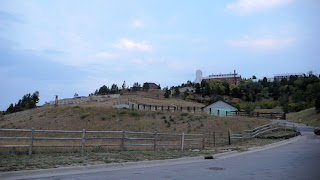 After many twists and turns through this very strung out town, I came to Lead and its banner announcing "Home of the Famous Homestake Mine!" Yes, that was what I was looking for! I had heard stories about how my dad worked at that mine not long after he and mom got married - the deepest mine of its kind in the western hemisphere. It always sounded to me like there was a special cache to having endured those deep levels of underground gold mining. The family story continues that when World War II broke out, dad was not drafted because miners were deemed more valuable as miners than soldiers. However, it was not gold that the War Production Board wanted so the Homestake's operations were suspended and dad was transferred to a  mine near Wallace, Idaho, one that produced silver, lead and other minerals.  I can't believe that of all the sightseeing we did on family trips back to the area, dad never took me up to Lead.  Again, I really didn't have time to walk around much, but it was worth it to see the general area and some of the buildings still standing (the mine ceased operations in 2002). It's quite the scenic area.

I still had some miles to go to reach my destination for the night, and it led me over another pass (over 6000 ft) and winding down again through more narrow canyons with exposed rock outcroppings. I rued the lateness of the hour, not long before it was pitch black. And then I crossed over into Wyoming and headed north for Sundance and the Rodeway Inn. You gotta wonder about a place that feels it is necessary to advertise "clean rooms." And that pool & hot tub? "Discontinued" for the season along with their advertised continental breakfast. Hadn't really thought about the fact that I might be traveling "off season" and was pretty disappointed with the accommodations overall. At least they had good internet connections. 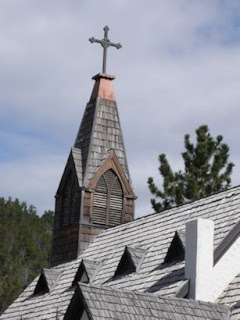 The stay in Sundance was not all bad. The next morning as I gassed up the car, I spotted this wonderful church spire. 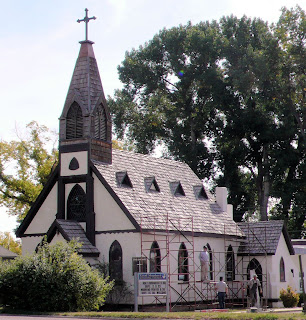 And how about this - it was an Episcopal church - Good Shepherd. I would have loved to have attended a service there.
Posted by The Idaho Beauty at 4:17 PM

Email ThisBlogThis!Share to TwitterShare to FacebookShare to Pinterest
Labels: Travel

YIKES......you are one brave lady! Take care and safe travels!!

It looks like the kind of place that would have a graveyard.

You mean the church BC? Yes it does, but alas, did not. But you can bet Deadwood has some interesting ones - something I didn't think about as I drove through. More reason to go back!